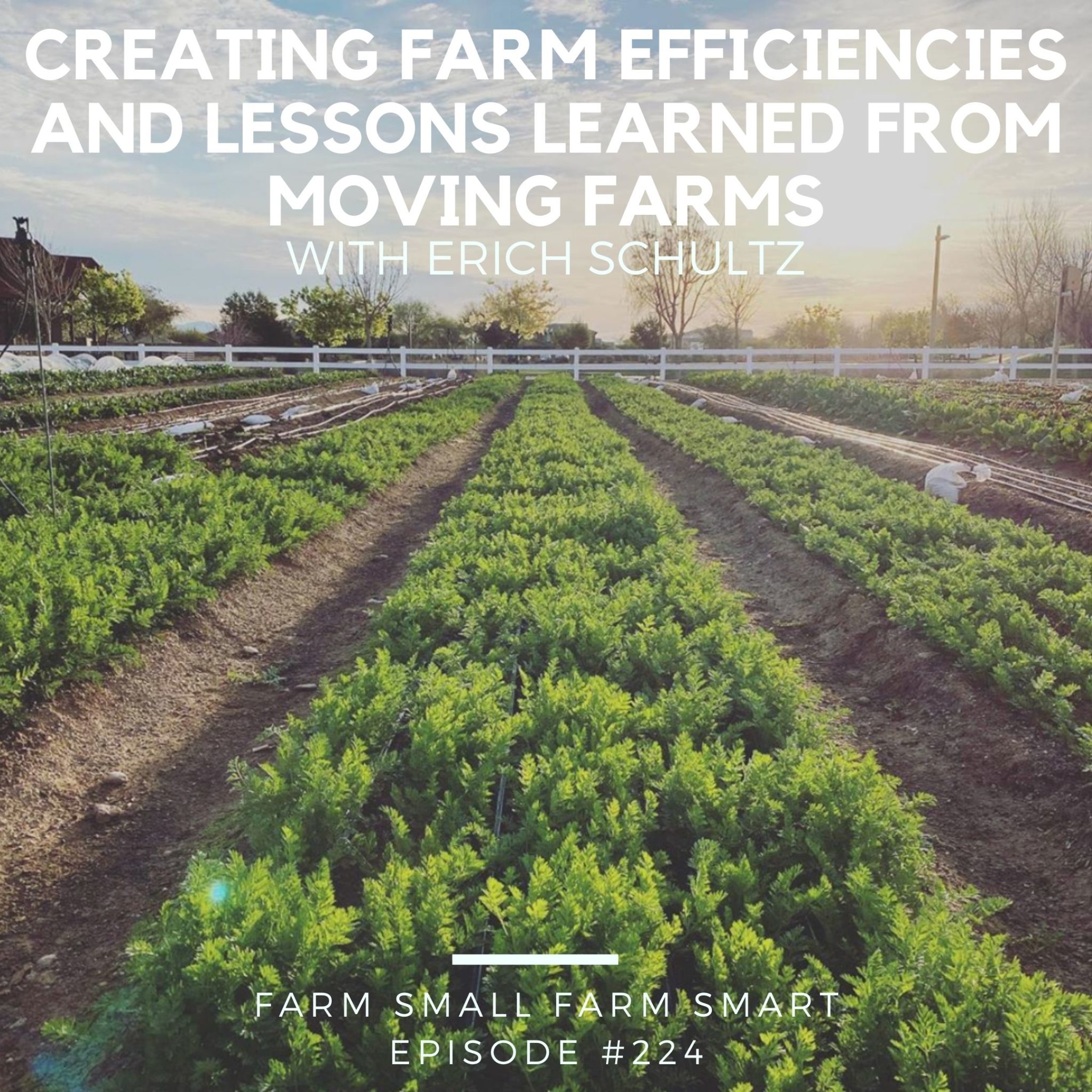 One of the first things you need to start farming is…land. For growers, do you own the land you farm on? Do you lease it?

Today we have Erich Schultz on the show to talk about his experience and learnings with farming and moving his farm over the last ten years.

It’s a lot of work. It definitely has pros and cons. The nice thing about moving is we get to refine the efficiency of the process of moving every time we do. The downside is that apart from being expensive, moving is a lot of work.

What’s the shortest lease that you would consider at this point? (6:00)

Our last lease was two years, and if we’re setting up high tunnels and infrastructures like we’ve done in our current location, two years would be pushing it. Right now, we’ll be two years into our five-year lease in December, and our relationship with the developers has been good so far. Both sides wanted to make sure we’re a good fit for the land for long-term leasing, and five years made sense for us just because we definitely put in more work than in our previous locations.

How comfortable are you farming in your new location? (7:50)

Very comfortable. We’re looking to renew the lease for at least 5-10 years. The production is good, our relationship with the developers and the community is good. And if things are going to be as good as last year, there’s really no upside to either moving or buying land at this point. We’re really happy with our set-up right now.

What are some of the big changes you wanted to see in your current farm design compared to your previous farms? (9:30)

Everything about the efficiency of the system’s flow. We refined our process even more—from picking fruit in the field to dropping it off into target area, to bringing it to the delivery vehicle, to the propagation houses, etc.

It’s really all the little things that improve the flow’s efficiency because it’s what spells the difference between making money and losing money. If there’s no good system, you can lose money fast. We’re really just applying what we learned in the previous locations and making them better.

Can you compare your production with your current farm to your previous farm? (13:20)

We have an acre right now, and an acre and a half in our previous location, but we’re definitely maintaining production. Year one was getting things going, preparing and improving the soil and all that. But now that we have all our gears going, we’re anticipating exceeding our previous location’s production this season.

Despite the start-up troubles, were you surprised you were able to make revenue exceeding 1.5 acres in the one acre you have now? (17:00)

It felt like it could be done, but obviously we had to prove it to ourselves. It’s not just the efficiencies that made it, we also had to make hard choices with our growing crops—cut out crops that were lower in value and take too long in the field. We had to make hard decisions not to grow crops that we loved to grow and choose to grow the things that we were good at growing that also paid the bills.

You’ve moved the farm four times while keeping the Steadfast brand. Is it brand power that allows you to do that? (20:40)

I think so, to an extent. Creating a good, recognizable brand was really important to us even from the beginning. The brand, I think, helps people follow the farmer and not the farm.

Did you bring the idea of the farm to the developers, or did they bring it to you? (25:30)

They came to me. I’ve done some wok on community-based farms in Arizona and other places in the country. I think they read some articles and then reached out. It took a while to figure it out since it was a foreign concept to developers in general especially since a farm is a long-term amenity, so they want to plan it properly and do right. It’s not a swimming pool or a golf course that they could build and move on from. We want to think how it engages the community and be woven into that fabric for a long, long time.

And I definitely think the idea of people reaching out to local developers is worthwhile. Part of the consulting business I have is doing just that—whether it’s us pitching or being that person between the farm operator and developer to help make sure that the farm is set up correctly. We also want to make sure that the farmer is valued and has a sense of ownership over the project as well.

How did developers warm up to the idea of having farms in their developments? (29:50)

They have to look at farms as amenities—something that would attract people to those communities. And local food has become very exciting now more than the previous years, and having a farm right here in the communities is attractive to people and makes them want to buy a house here.

At the end of the day, even if a developer is making this happen, it’s still creating more farms and more local food.

What are some of the big challenges of starting a new farm? (31:50)

There’s always a new set of challenges every time we move to a new location. It just takes time and a lot of patience. We never expected to be at a hundred percent production-wise in our first year.

Moving to this new one, even though we’re in the center of this community, there’s still a lot of desert wildlife that we have to deal with and have to figure out how to work around.

In this new location, we didn’t have access to agricultural water. We were relying on city water, which again had its own set of challenges, the biggest of which was the cost. We spend about $1,000 just on water, which is one of our biggest costs right now. There’s also the way city water is treated before it even gets to us.

Brand-new soil had its own set of challenges, too—we had to start from scratch. We started with native desert soil, and since we didn’t want to bring in soil from elsewhere, we wanted to improve the native soil. A year after starting farming here, I feel like my knowledge of soil science grew dramatically since this soil was the most challenging I’ve had to work with so far. We did a ton of soil tests and thankfully, recently, things are looking more significantly balanced in general since last year. And we feel pretty good about it.

How do you view tools and technology in terms of trying and spending on new ones and putting them aside? (42:40)

I definitely simplified and got rid of a lot of tools in my three, four years. I think it’s easy when you’re early in your career and you’re trying to figure out what your style is, so you end up chasing every new tool until you end up with a shed full of barely used tools. As time has gone, it’s just comforting having my own approach to farming and knowing what works best in our context. We’re pretty low on jumping on new tools. We’re in an age where we can share information much quicker. It’s been so helpful being able to interact with different growers and learn from each other.

You’re standardizing all your crops to have 6” spacing on the paperchain. Why are you doing that and how are you compensating? (48:00)

We never had a crop that did poorly because it had more space. Whatever crop has more space between them only improves. They have more room to grow, and they tend to size up faster. The trade-off is that it’s less dense and it has lower yield. For us, we were already using 6” paperchains on all the crops. We only used the 4” ones on a handful of crops, while we barely used the 2” ones. Sometimes somebody would use the wrong length for a crop, so standardizing it would simplify things a lot.

As far as simplifying and standardizing go, will you also standardize the number of rows per bed? (53:50)

Yes, we’re doing four rows per bed right now. We did a few crops as five rows per bed like onions, but right now, we’re just trying to take away the variables. Since we have a crew constantly training people, the simpler we can make it, the more we’re setting people for success.

When you look at some of the consulting work you’ve done before, what are some of the challenges you help farmers work through? (55:40)

A lot! I talk to folks who have been farming for a while and just need a fresh set of eyes to take a look at their operations to bring it to the next level and improve efficiency. There are also folks who are just starting out. A lot of the challenges nowadays is that there’s so much information now that it can be a bit overwhelming for people—so many choices, tools, techniques. Sometimes they just need someone to come in and simplify things.

A lot of people also struggle with crop planning. It’s one of the most important things to be profitable on top of efficiency and equipment in small scale farming. The more crops you can squeeze in every season, the more potential revenue there is. So, having a really good plant and sticking to it is really important to the success of that farm.

What’s your approach towards crop planning in a year that can be dynamic and something that you can stick to? (58:45)

I mentioned before that we’re growing less crops than we used to, so one of our main priorities now is to have a consistency with the crops that we grow. Our number one is to have all crops we grow almost the entire season, like salad greens and radish. We do spreadsheets and keep track of our crop rotations so we’re being complimentary to the crops we plant after the current ones. We also plan for contingencies for things that might happen.

Picked up some ideas and want to learn more?  Drop Erich a line and check out his consultancy services over at Steadfast-farm.com!