That’s what Darren Vollmar at Ledgeview Gardens in De Pere, Wisconsin, is doing. A 20-acre farm that grows both in-field and hydroponically, Ledgeview Gardens does 40,000 paperpot onions of six different varieties every season: three early-season and three storage varieties.

In this webinar, Darren Vollmar shares tips and techniques for planting 40,000 onions with the Paperpot Transplanter.

Storage or Fresh. When selecting onions to grow, remember that certain varieties are meant for storage into the winter and others that should be eaten fresh and will not store well.

Paperpot Onions: The Downside and Upside

Downside. Planting paperpot onions at a high volume in the Paperpot transplanter requires a lot of space and a high upfront cost in trays.

At their volume of 40,000 onions at 264 cells per tray, about 151 trays are needed to seed them all in, plus an extra 20% to account for potential germination issues.

For perspective, the space required to hold all Ledgeview Gardens’ germinating onion trays is a 5’x100’. The space holds eight varieties of 5,000 plants each. 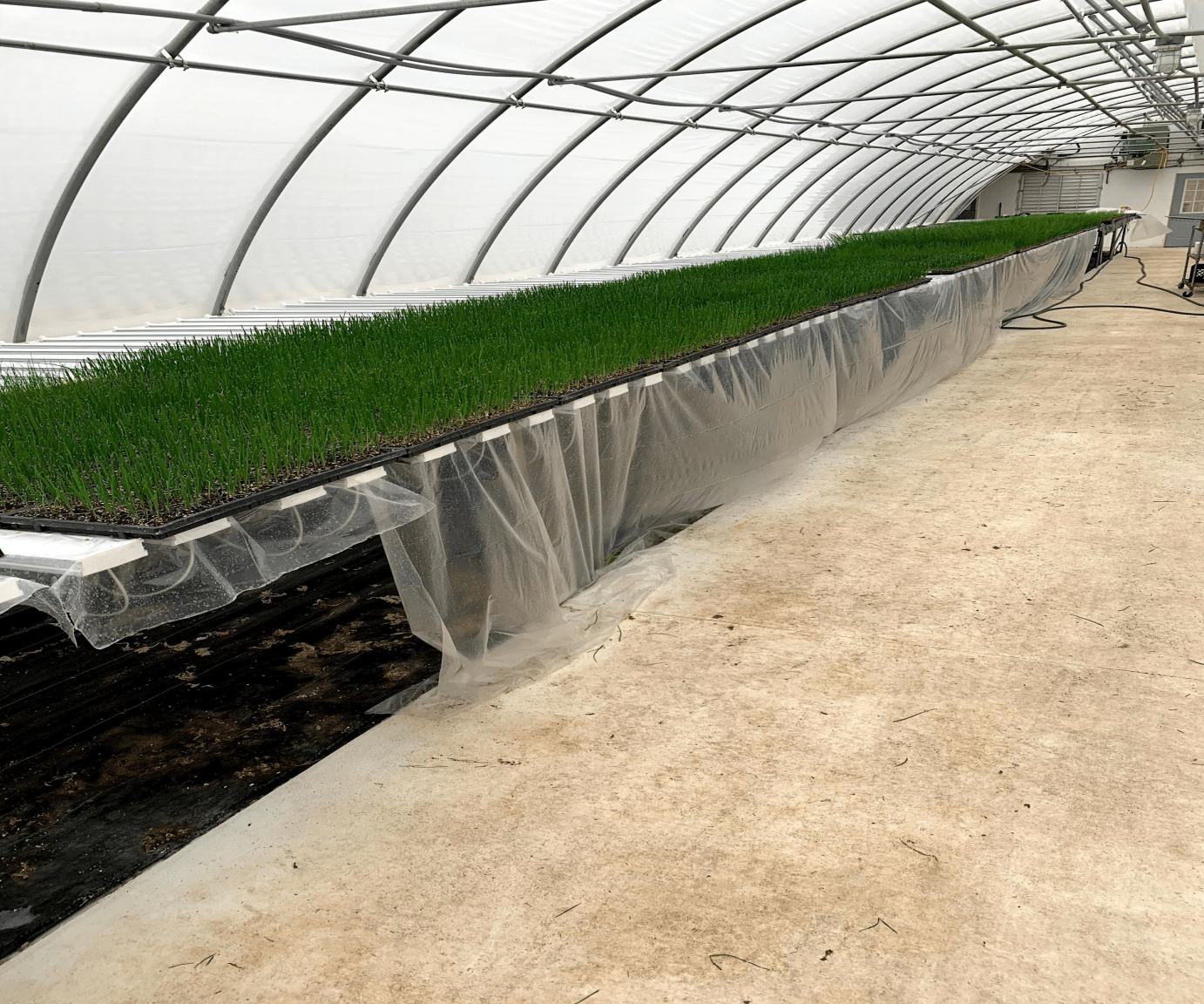 Upside. Despite the space issue, the Paperpot system makes up for it by cutting down the time needed to plant out all the crops to less than half compared to traditional hand transplanting.

At Ledgeview Gardens, Darren can plant out 40,000 crops of onions, leeks, and shallots in a day and a half, and even faster with another person following behind carrying fresh trays at the ready.

Darren shares how they prep their beds and mark their spacings when planting onions at Ledgeview Gardens.

Aim for loose soil. The Paperpot Transplanter works best on loose, fluffy soil, which you want to aim for when planting out any crop using the tool.

Minimal rocks and debris. The biggest problem Darren watches out for when doing his bed prep are rocks. He explains that when the transplanter hits a decent-sized rock, it will shift and curve the row. Although it can be easily corrected, the issue will come later on when weeding using a mechanical weeder that does multiple rows at a time. Chances are, the weeder will either pick up an onion or two or pick up the paper chains if they’re not buried deep enough. Remember: If you hit a rock and the row shifts, try not to follow the curve while you’re doing the next row.

Minimal Till. Though not required, Darren tills his beds just enough to loosen the top layer of soil for the Paperpot Transplanter.

Minimal to low soil moisture. For a smooth transplanter run, make sure that your soil’s moisture content is just enough that the transplanter’s weighted wheels can compact the soil around the chains, but not too wet that the soil will pull in clumps as the tool runs along the bed.

Space between rows. Onions will perform well even in tight spacing between rows, up to six rows in a 30-inch-wide bed. That said, planting at tight spacings may pose a challenge when doing mechanical weeding that requires hefty tire space.

Firm bed edges. When planting on raised beds, having a bed maker that will firmly pack the bed top will significantly help fit those six rows on a 30-inch-wide bed.

Paper chains. Onions will do well in all paper chain spacings. Darren does most of their onions in 4-inch paper chains except for leeks, which they do in 6-inch chains.

Nutrient shot. Because Ledgeview Gardens has a hydroponic setup, they’re able to fertigate their trays with water-soluble nutrients of phosphates and nitrates, which is easily achievable by dissolving all-purpose plant food.

They use OMRI-certified Monty’s All-Purpose Plant Food in liquid form that they dilute and apply by overhead watering. The nutrient shot gives the onions a boost and keeps them green.

When to seed. In Wisconsin, where Darren farms, they seed their onions around mid to late February.

Germination rates will be seen around one week after seeding. If there are spots of bad germination, Darren re-plants trays and consolidates them, or he will dibble the empty cells with a pencil, re-seed, and give them more time to germinate. 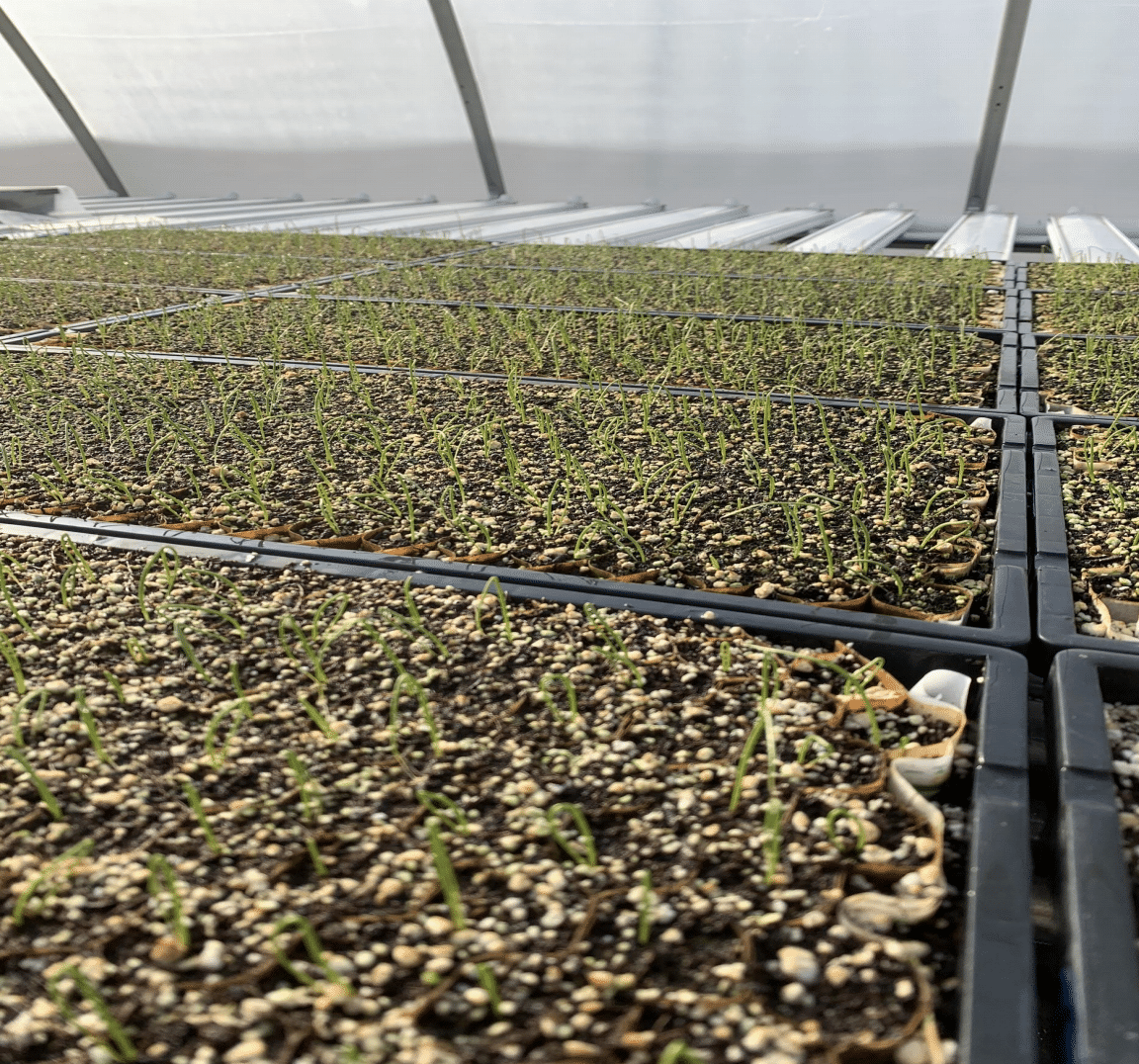 One week after seeding.

Miniature greenhouse set up. The seeded trays are covered with a plastic sheet to create a miniature greenhouse environment and retain humidity. Once they germinate, the plastic comes off until they’re ready to be planted out in the field.

Trimming. Onions are trimmed twice. Trimming the top allows the plant to redirect its growing energy to the root system and the bulb itself. Trimming also prevents the tops from tangling with each other when they’re transplanted out into the field.

Yellowing Leaves. After trimming, the area where the cut was made will tend to yellow. This is not a cause for concern. However, if the leaves begin to yellow going down towards the bulb, you might want to give them some additional nutrients to help them green up. The extra nutrients will also help to prevent transplant shock. 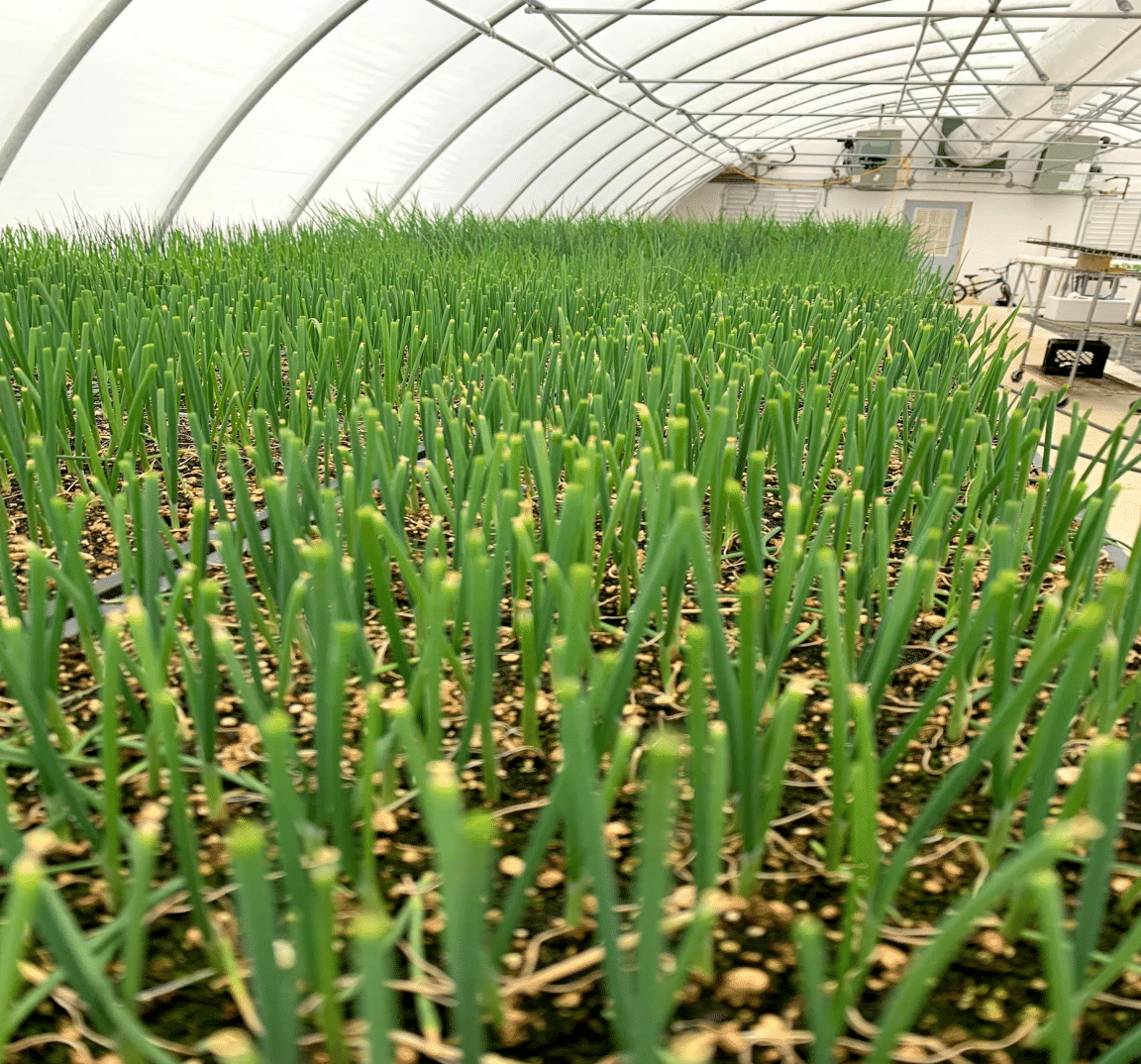 He shares an anecdote of having left trays of onions in the greenhouse because there was no space in the field. The onions bulbed up into cipollini-type grew out of the chains just fine and never needed to be planted out into the field.

Four-inch chains made the most sense for Ledgeview Gardens’ context and provided just the right amount of space where the onions would almost touch after they sized up, given the nutrients they needed for the season.

On the other hand, six inches were a little too much space to allow more weeds to come up between each cell.

The onions are ready to be rolled out into the field 1½-2 weeks before the last frost date, which usually falls on late April or early May in Wisconsin. The crops also get one last in-tray fertigation before they’re planted out.

Adjust planting depth according to your soil structure. Given that onions are stocky, they thrive best planted deeply in the soil.

In soft, sandy soils, the onions can be easily planted deep with minimal adjustments to the transplanter, but in harder, clumpier clay soils, it might be a little more challenging, and some onions might peek out from the soil. Adjusting the weighted wheels will help to plant them deeper. The first rains also help with setting in the onion roots.

If the onions are planted deep enough, you won’t have to worry about accidentally pulling up the crops when you are weeding. You might hit the chains, but the onions will stay in the ground.

No outgrowing roots. Make sure no roots are growing through the bottom of the tray. Otherwise, the trays will hold onto the onions as they’re being planted out. The transplanter’s ramp can be used to scrape off the roots for a smooth planting.

A second person to help. Although the Paperpot Transplanter’s weighted wheels do a good job of covering up the chains and packing down the soil, occasionally it will miss a couple of spots, which is why a second person follows along and fills in those spots as Darren operates the machine.

With their toes pointed out and their heels pointed in, the second person straddles the rows and digs their heels in to fill in space that the transplanter could not fully cover-up. They also carry fresh trays to replace the empties for Darren. When there isn’t a second person to help, Darren will leave replacement trays at about 16-pace intervals.

If the rows of paper chains are out of the row alignment, the second person can also set the chains right and re-burry them before continuing down the row. 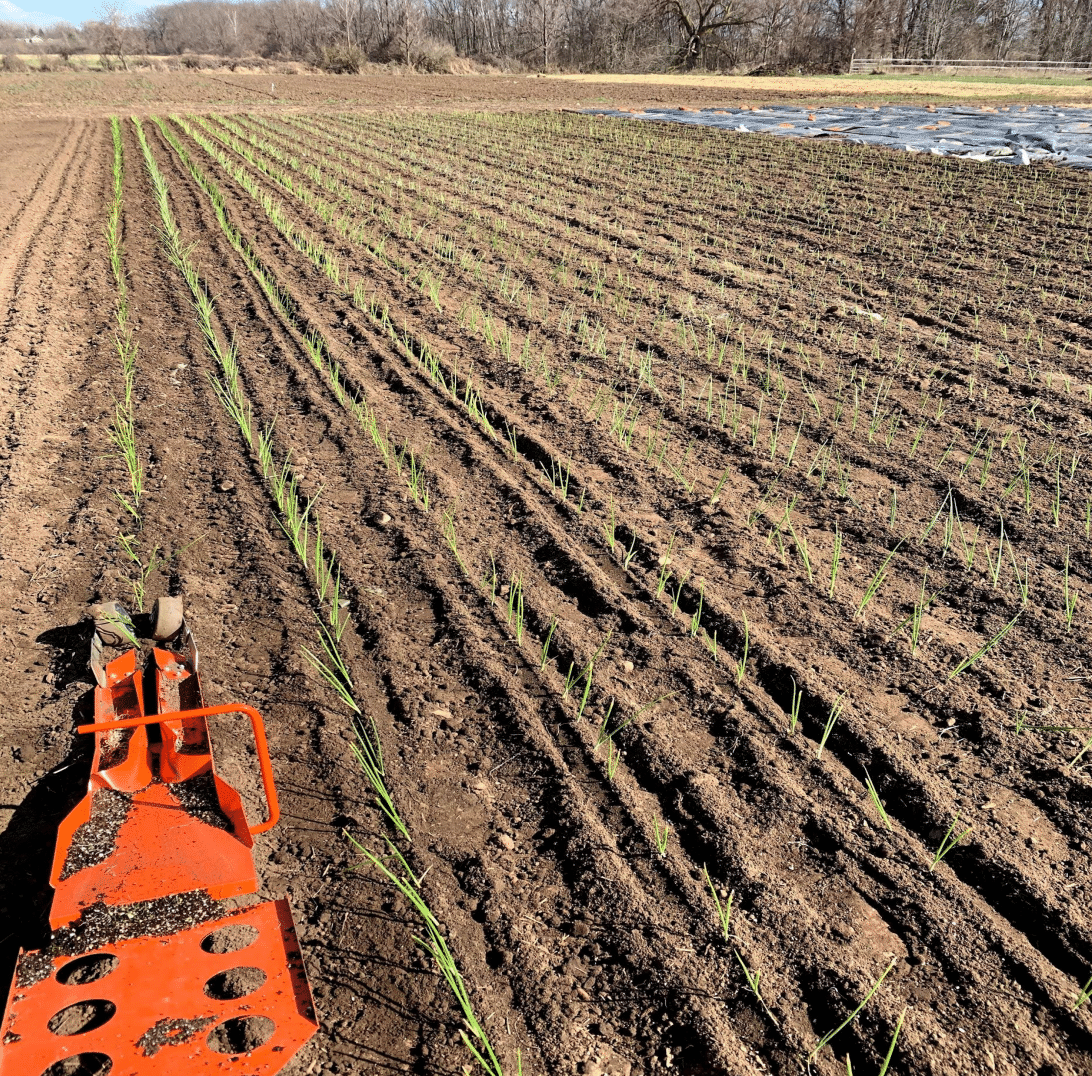 Planting out onions at 4” in-row spacing.

Planting in paper chains or not, Darren says that weeding is always the most challenging part of growing onions. And when the in-row spacing is 4”, it’s twice the challenge.

Early bed prep is the best. The best way to stay on top of weeds for growing any crop is to deal with them before they become a problem, and stale seed bedding is a great way to do it. Depending on your farm and your weed seed bank, flame weeding can also be a good option, although Darren notes that flame weeding doesn’t work too well when they’re dealing with crabgrasses on their farm.

Finger weeders. Although the roots need to have firmly set in before starting, finger weeders work well with the paper chains.

Tine weeder. When considering using tine weeders, take care not to go in aggressively, and make sure that the chains are deeply buried. Otherwise, you run the risk of tearing up both the paper chains and crops. Onions are hardy, but if tine weeders bend the onion necks too much, the cell structure of the plant can get destroyed, which then stunts the onion.

Wire weeders. Wire weeders work well with leeks but not with closer-spaced onions.

Wheel hoes. Wheel hoes only work between the rows but not between crops within rows. 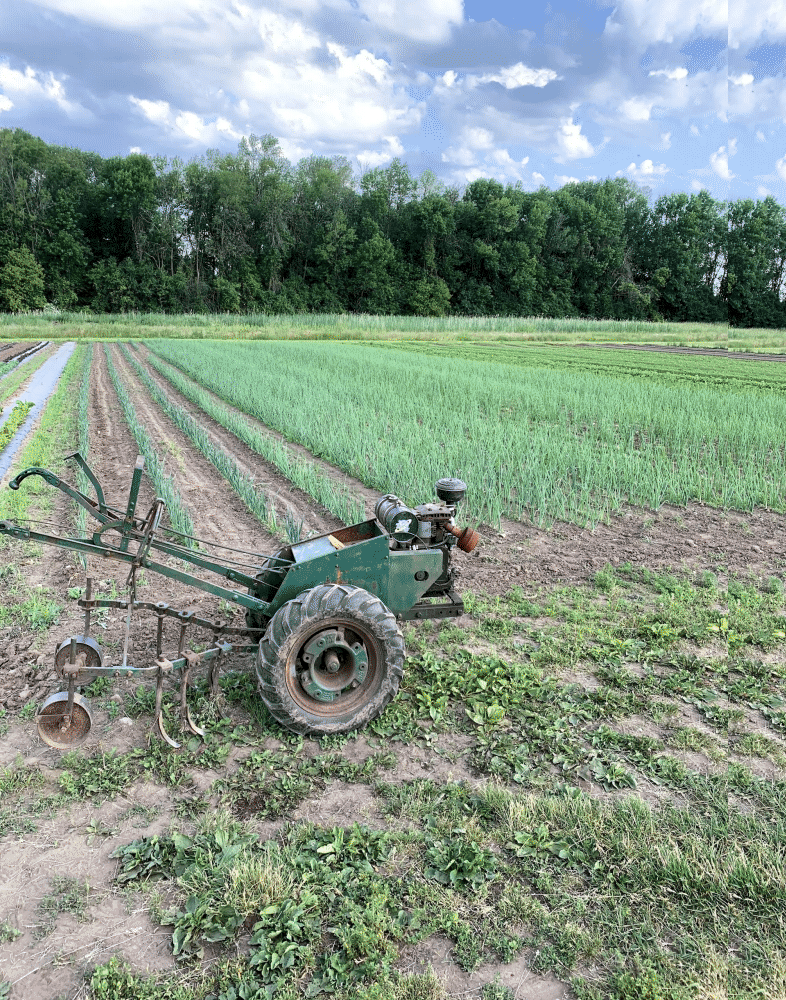 The fewer number of onions there is to a pound, the better it is for market sales, which is why Darren is pleased that they’re able to bulb up their onions to good market sizes. That said, he does have customers who want giant, 3-4” diameter onions, while others prefer small to medium-sized ones.

This goes to show that however big you grow your onions, there will be a market for them.

Some market farmers have that gardener mentality—they tend to baby their paper chains, go slow when they’re transplanting, and come back afterward with a rake to clean up and neaten the rows. In a 20-acre farm of direct-seeded, paper pot, and waterwheel crops, there just isn’t time for that.

“I’m pretty confident in the structure of the paper and the chain unit itself. I’m confident in the soil structure in those cells, with the onion staying where it needs to be or the transplant staying where it needs to be. When I start rolling out paper chains, without racing, I’m going for speed,” Darren shares. “If you spend a ton of time really babying those cells or coming behind and hand packing or anything like that, you’re losing the efficiency aspect of this whole thing.”

When the goal is to put out 40,000 onions in a day, the speed and efficiency that the Paperpot Transplanter affords must take precedence.

Paperpot and Other Kinds of Onions

Shallots. Shallots are better grown from seed than bulbs or transplants, as they grow much larger.

Leeks. The only onion grown in 6-inch paper chains, leeks are planted out a little differently than the others at Ledgeview Gardens. Rows are marked out with a string, and a double plow wheel hoe creates 4” deep trenches. The paper chains are then transplanted into the furrow and filled back in after the roots have set in.

Leeks with a higher white blanched portion of the stalk are considered more valuable at the market. Due to this, Darren hills his leeks during cultivation to further bury more of the plant, blanching even more of the stalk.

Get in touch with Darren