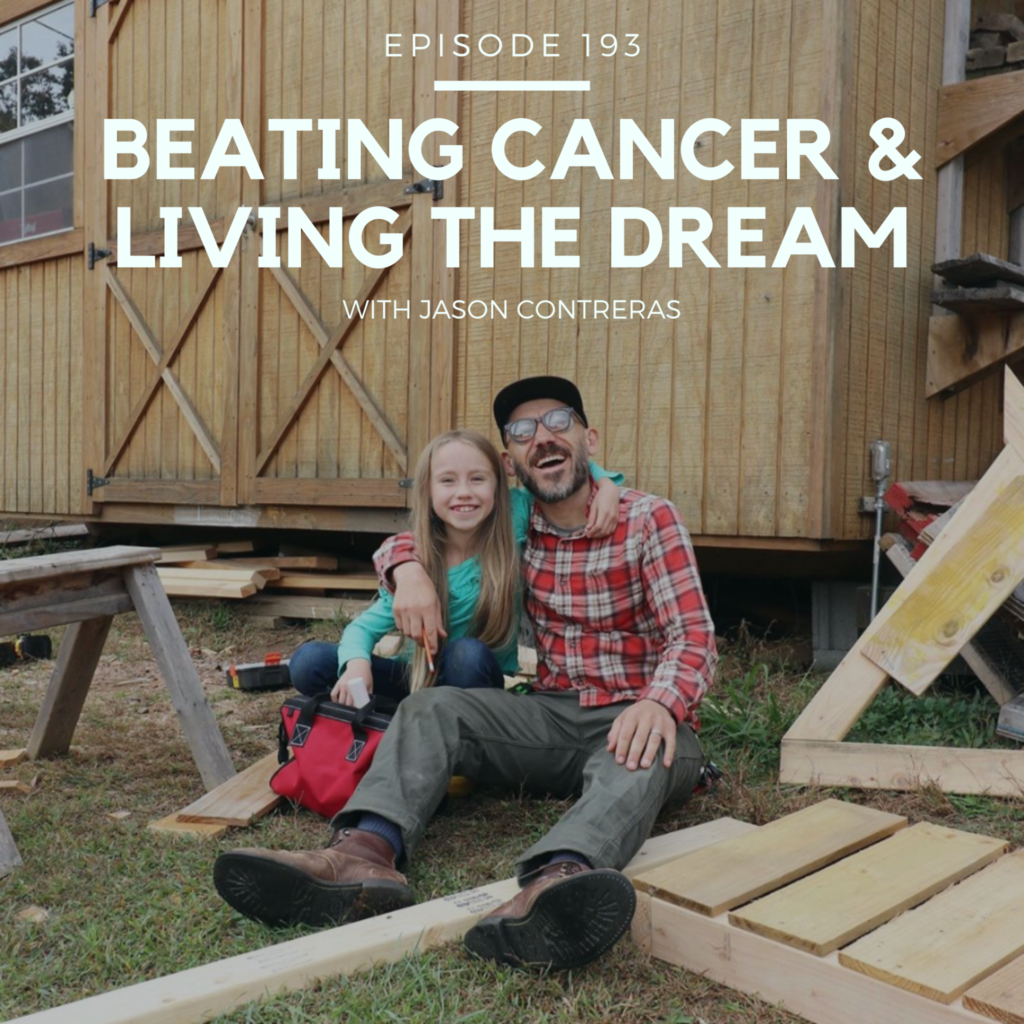 Jason Contreras joins me to talk about his journey from working in an office in Southern California to battling cancer to moving across the country to homestead with his family in North Carolina.  Jason’s story is inspiring and goes to show that you never should give up.

“Your life can change in an instant. I was 30 years old and from one day to the next I had cancer.”

I had the same job for sixteen years and it was eating away at me. Cancer made me ask the question, “Do I really want to be in this office? Is there something else out there for me?”

“When you consider a homesteading lifestyle it’s easy to see how difficult it might be.”

I think people get caught up homesteading by getting all of the animals at once. They get burnt out and can quit altogether, or hopefully just pair down. You should slow down and not take on everything at once. You don’t need the goat, goose, chicken and milking cow to be a homesteader!

What was going through your head when you got the cancer diagnosis? (9:00)

It was a shock. I had just turned 30 and I asked: “Why me?” I wanted to know why it was happening. The more I started talking to people I started realizing maybe this lifestyle change is the reason I got cancer. We are now inspiring people to make the leap as well.

I did 6 months of chemo and when the doctor told me I was in remission it was like I had a second life. I felt like I couldn’t go back to my old life anymore. I can get cancer again fairly easily. So now I know how precious life can be. I went through chemo with someone that had the exact same diagnosis and they didn’t make it.

I never thought it was the end. I never gave up hope since it was all I had. I have told other people in my family with cancer diagnoses about these feelings. It was an incredible moment when the doctor told me I was in remission, but I did have a second cancer scare when we had just bought the land. I hadn’t quit my job yet, and we hadn’t moved. I was sure it was back from the symptoms I was having. We decided if it was we wouldn’t make the move. Then the testing came back and confirmed that it wasn’t. That was when I was truly relieved. We got the final green light to pursue this new life.

Was this ultimate kind of fear that made making the transition seem like a much smaller fear by comparison? (18:00)

That’s exactly what it is! You say to yourself; “It could be worse. I could have cancer.” I realized that I wanted to not be behind a computer screen anymore. I realized I would have to make sacrifices and once we moved I said yes to everything that came my way. I took my tinkering and woodworking crafts to another level and opened a small online shop that sells out of Ashville. My background is in computer drafting and that was always my fall-back. The first job I did was as an Uber driver. I just said yes to everything and still do.

Now that you have the benefit of 3 years of hindsight do you think you ever had something legitimate to fear when you were considering making the transition back at your office job? (27:30)

No, there was nothing to fear. It’s hard to think about that though since there’s no way I would’ve known that. For us, if it didn’t work out we would’ve had to move back in with mom! But that was motivating since that wasn’t really an option.

Was farming one of the sources of income you considered? (31:00)

Yes. My original thought was to raise meat chickens. I took a course at Primal Pastures before we left. We do a little bit of that now. We raise 60 chickens for ourselves, and this year we raised enough to cover the cost of feed. Eventually, we will raise more to generate more income. I always thought it would grow organically and we’d just see where it goes.

We’re only on 1.5 acres right now. It’s not our forever home. This place is our starter homestead so we can begin our journey. We want to be more efficient at what we are doing now and just naturally move into the next larger steps. I’ve taken that mentality from listening to your podcast guests.

Jessie has changed his life in remarkable ways going through the experience of a cancer diagnosis. Can we take something away from what he’s experienced without having to go through it ourselves? Sometimes we need a wake-up call to rattle our bones. We’re thankful Jessie was able to use his experience as an opportunity to make positive changes in his life and that he came through the diagnosis with a healthy outcome.