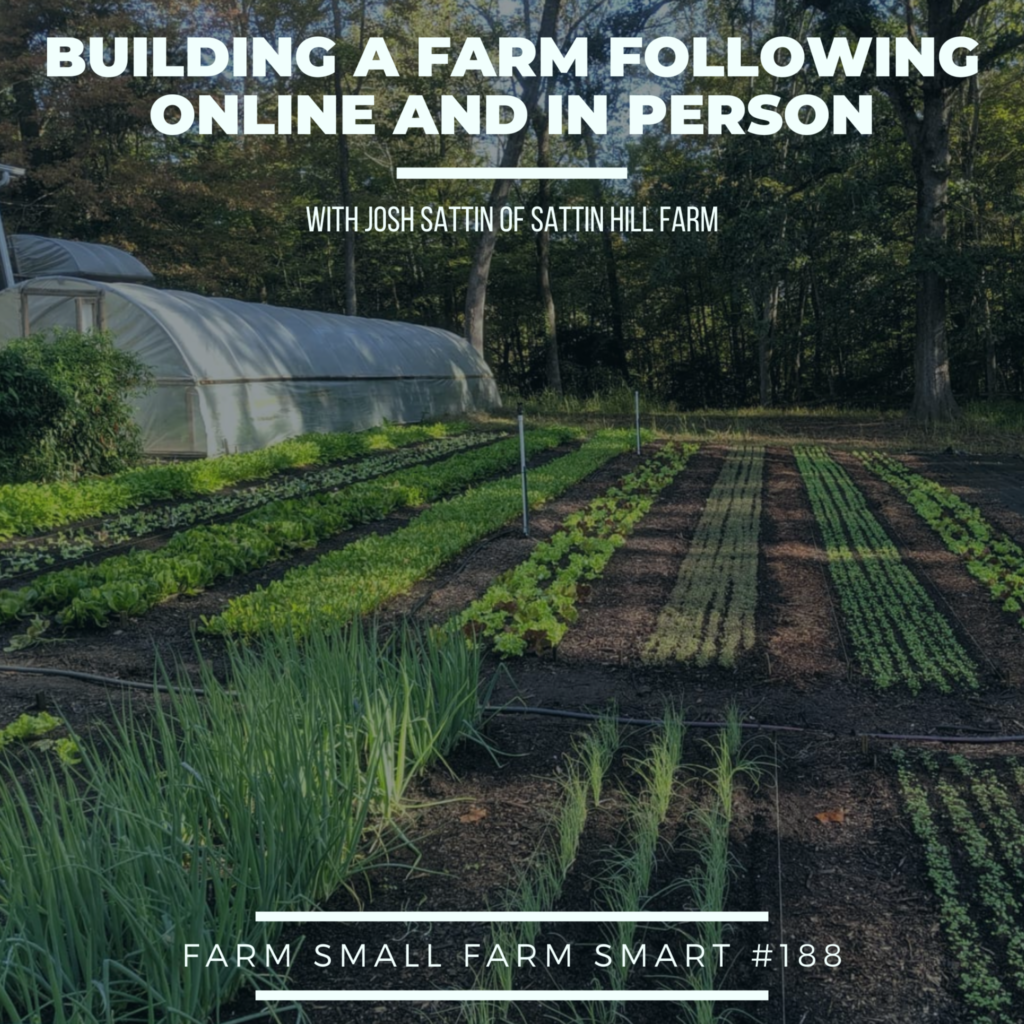 Farmer Josh Sattin from Sattin Hill Farm joins me to talk about how he built up a farm following for his new farm pretty quickly – both online and in-person with local chefs.  He shares strategies for how he did that and how it has helped with sales.

He also gets into the various ways he is building soil on-farm from his no-till methods to using wood chip mulch in his pathways to utilizing chickens to prepare new growing areas.

What’s been the hardest part of starting your farm? (4:00)

The marketing and sales side of the business. Even if you have a great product if you’re not selling it you’re not making any money. Along with being a farmer. That was also challenging. With being a brewer I was able to get a formula and predict outcomes. With crops, it’s always changing. Taking that in, along with crop failures that’s been the hardest part for me.

What were the challenges in your previous business moving the product? (6:00)

It was a homebrew store, selling equipment to homebrewers. It was a retail job and I didn’t think about it going in. I’m not an introvert, but I struggle with putting myself out there. Since getting the farm I’ve been trying hard, getting myself out there with social media. I started selling to friends and friends of friends, using word of mouth to sell greens boxes. I built a lot of content to get myself out there.

It’s finally started paying off. I posted every day for a year. It’s been overwhelming. Now I sell exclusively to restaurants. The first thing they do is check out your Instagram and they realize I’m a legitimate business. At first, it felt like I was doing a lot of work for nothing but now it feels like it’s paying off.

In the last couple of months I’ve curated my posts less, now that I’m concentrating on YouTube. I had a video go viral on Instagram and I watched it 200 times and it was hard to figure out why it did so well. It’s all about telling your story.

Whatever your posting schedule is, be consistent with it. Quality is important too. Having good equipment certainly helps. Use the caption to tell a story. Don’t just “sell, sell, sell”. Maybe make one out of ten posts a marketing pitch but no more than that.

How would you approach a restaurant now that you wanted to market to? (16:00)

Old school networking. If I blindly approach places I never get a response. But if I get a referral I get a call back about half of the time. I approach current customers and ask them for a referral, it’s important, especially with chefs. Once you start working with chefs you’ll be texting back and forth from week to week and once you start a good personal relationship they’ll want to recommend you to other people because they’re friends with each other.

How has the competition been getting into the restaurant scene in Raleigh been? (18:15)

I thought it was going to be difficult getting into some of these restaurants and selling products like microgreens since everyone is growing them out of their garage, but that hasn’t been my experience. I took pea shoots to a chef recently and they said they’d never had them like this. And I thought some of the places I’ve approached would have 10 local farms selling to them already but they’re just working through distributors and I’m they’re only local farm. It’s further behind here than I thought it was. The dynamic is changing here as many people are moving in from the NE.

Are you finding that you can be competitive on price? (20:30)

I find that I can ask chefs what they are paying for this or that. A lot of the chefs are new to this local scene as well and they are learning about what to pay as well. At times I just show up with better product than the distributors since it’s fresh and they’ll just take whatever price it is. I pride myself on not charging too much.

What changed from your difficulty marketing in the past at the homebrew store vs. your current success now? (21:40)

I sell to 5 restaurants now. It’s in a lot of flux. It could be different in just a few months. I am not exactly a stay at home dad but I do take care of the house, take care of the kids; shopping, cooking, sending them off to school, being there when they get home. Then there’s a lot of content creation I’m now doing with YouTube. So it’s like having three part-time jobs. I’ve reduced the number of beds I’m growing on now.

A lot of people start and stop and don’t realize what it takes. I was getting a lot of questions and was getting tired of answering them. I was a teacher originally so answering these questions comes naturally to me. Finding the balance was tough. Working 30+ hours on the farm and then another 20+ on the videos was difficult to balance. I’ve had to cut back on the farm recently.

What’s been the biggest struggle in finding that ever-elusive balance? (26:00)

What do you want to do, how much time do you want to do it and where can you make money is the balancing act. It’s an evolving thing. I tried doing 3 videos a week and realized “this is nuts”. The videos slow everything down. You need to record them at the right time but also need to make time for them and have the motivation to.

I try to keep the bigger picture in mind as well. To grow the abundance mindset. It can be hard to concentrate on this. It can be difficult to always concentrate on it as well. You are always looking for the next idea in the back of your head. Some of my best videos are about very specific content that probably really helped somebody. Something that someone would probably pay for. Can every video be like that? No. I try to interject some of my personal life in there as well. I’m constantly changing my format – I can’t do the same format all the time.

Not being able to get away from the farm. I don’t have any employees. And the other one is that it’s so variable. You can be killing it one month and the next the heat really kills you. I like to think about what you can control. I do well on microgreens. I do well on egg production, I’m going to double down on those things.

What are your thoughts on integrating egg production into a market farm? (35:40)

It depends on your market. If you can sell them for the value you expect they’re great. I do pasture-raised eggs and I’m always short on them. I’m selling $6/dozen right now. The key is having the right breeds and get the right feed. I use non-GMO feed. I’ve had other birds and the hybrid laying birds are the only affordable ones. I’m using ISA brown birds now. I use the Seven Sons rollout nest box and I love it. I don’t wash eggs. Maybe one out of 50.

How has it been selling pasture-raised eggs to chefs? Did it take a pitch? (39:30)

If you are in a rural area it would be challenging but in this area, chefs understand what pasture raised means and if they can’t get it they’re going to buy it. There’s a pitch, the best thing is to give them 3 dozen a try. They bring them home, they put them in their dishes and notice a difference. They can market them and charge an extra dollar per plate and that makes it worth it to them. We have 80 chickens.

How do you approach restaurants with veg? Is it the same approach as with the eggs? (40:50)

I set up a meeting. I try to do it on my delivery day. Bring a lot. Give them whatever you can. And every time I have something new I bring it in. Ask them to try it and get to know what they think.

Do you want to expand your microgreen varieties? (43:30)

I am growing mostly peas, a little bit of sunflower and radish. Your market will tell you what to grow. I like when you get more weight per tray.

How would you describe your soil system on your farm? (44:44)

It’s a deep tillage mulch system. I have red hard clay. I use a broadfork now, I’m hoping to use it less. I put compost down on the surface now and just plant directly into that. That’s pretty much it. Getting that hard clear of weeds in the beginning is really important. Use a tarp, pull them, I used chickens; you really have to get them out of there.

You wouldn’t want to for food safety reasons. I also have permanent beds with mulch in the pathways and I wouldn’t want them to mess all that up. You could rest beds for a period, put a cover crop down in a block and let the chickens out and that would be cool if you did it in the offseason.

Do you think about cutting back on the compost? How are you thinking about soil numbers? (52:00)

Yeah, I look at my beds now and think perhaps in a few years. I’m on a slope and a lot of it runs off. And it’s hot and humid in the south so a lot of it breaks down quickly. I’m not a soil tester. I tested the compost once and the numbers were good and that was enough for me.

Pros and cons. It looks awesome! If feels good to be there. On the slope, it keeps the beds together. It adds microbial activity as well. A con is the chips end up in the beds. They don’t immobilize nitrogen in your beds unless they’re underneath the dirt in your beds. They hold water so it dries out after it rains better. They break down quickly here and walking on them compacts them down.

No, I haven’t. I think it would be good to do some deep tillage when you get started but after that, it doesn’t seem necessary here. I’m not going to go out and buy a tiller. It works for me. Someone’s system may not work for you and that’s alright.

A lot of it comes down to relationships with customers. The satisfaction of feeding people felt really good.

You can follow along with Josh’s journey by visiting him on the web at Sattin Hill Farm on Facebook and IG. Be sure and visit his YouTube channel at Josh Sattin to learn more farming content from him, including his no-till methods.