Common Microgreen Diseases and Solutions to Them (FSFS189) 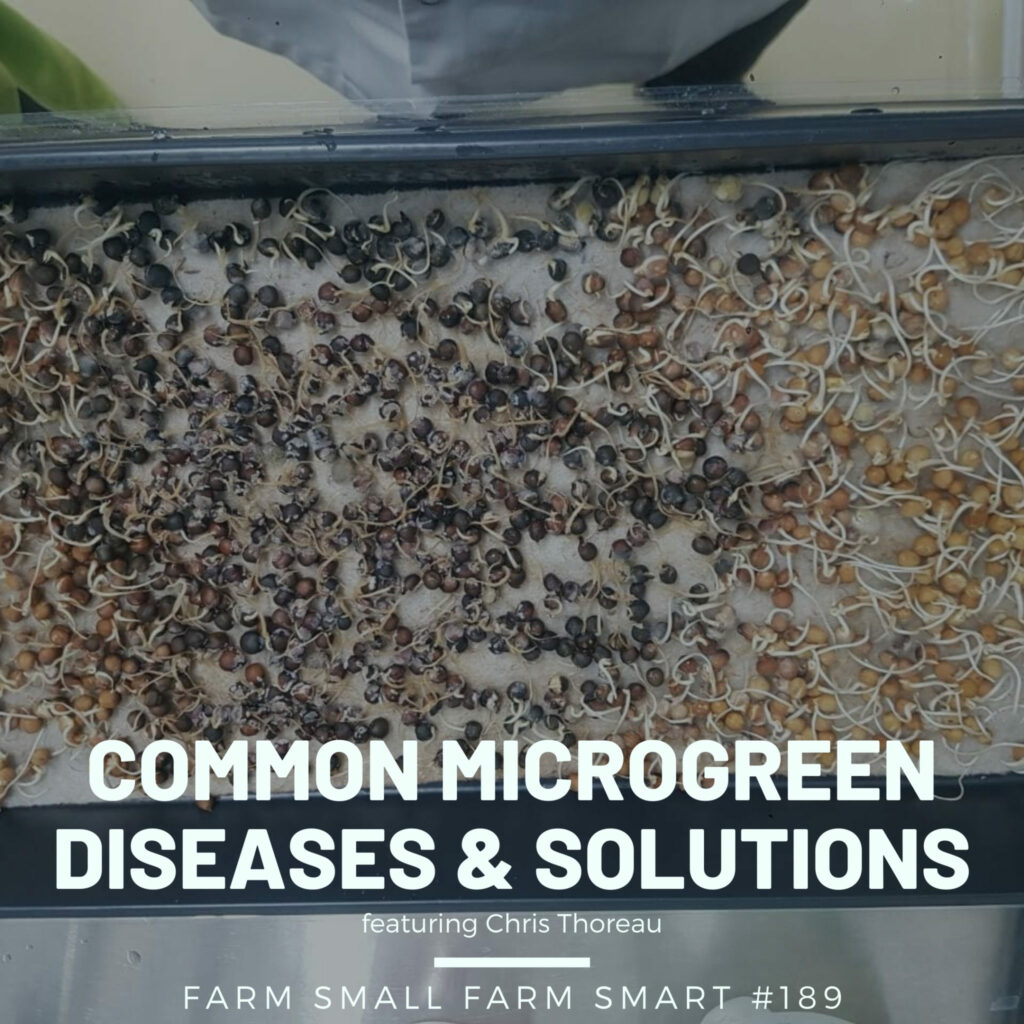 Depending on your growing environment you may encounter one or perhaps even all of these diseases. And what do you do once you encounter them?

If there’s a small section of mold on your tray, for example, what do you do with that tray? Do you scrap the whole tray or can you harvest the unaffected part?

We ask these questions with long-time grower and micro-green expert Chis Thoreau, this week, on FSFS.

“My pea shoots have black mold. My radish sprouts have little brown spots. What do I do?!” 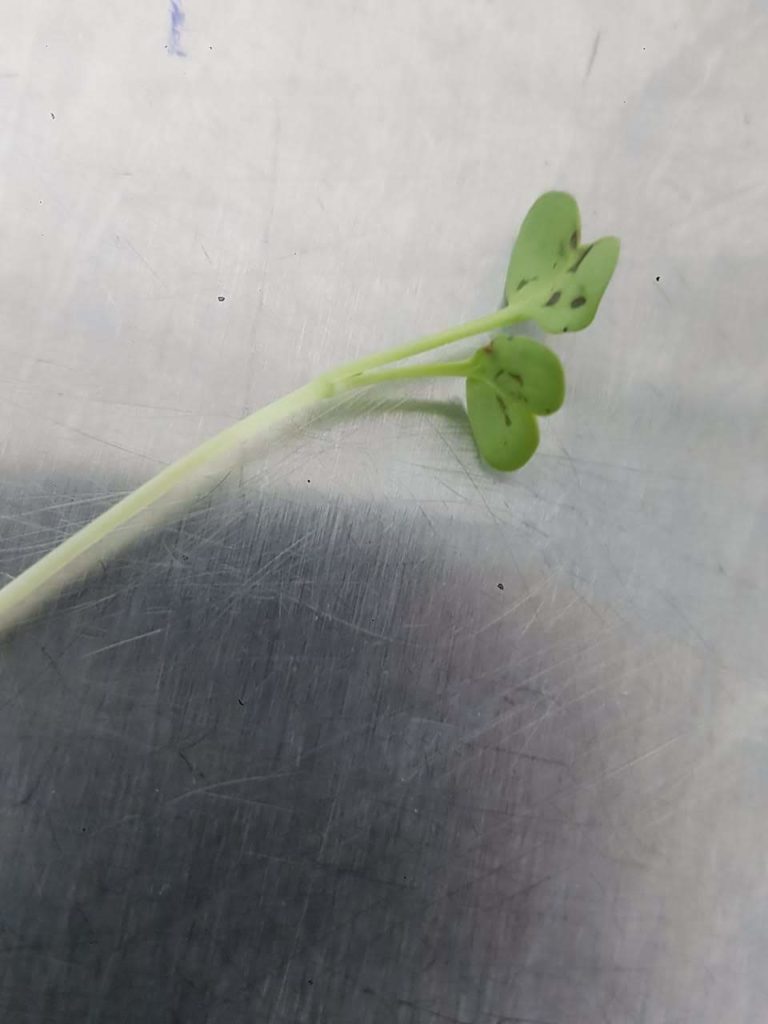 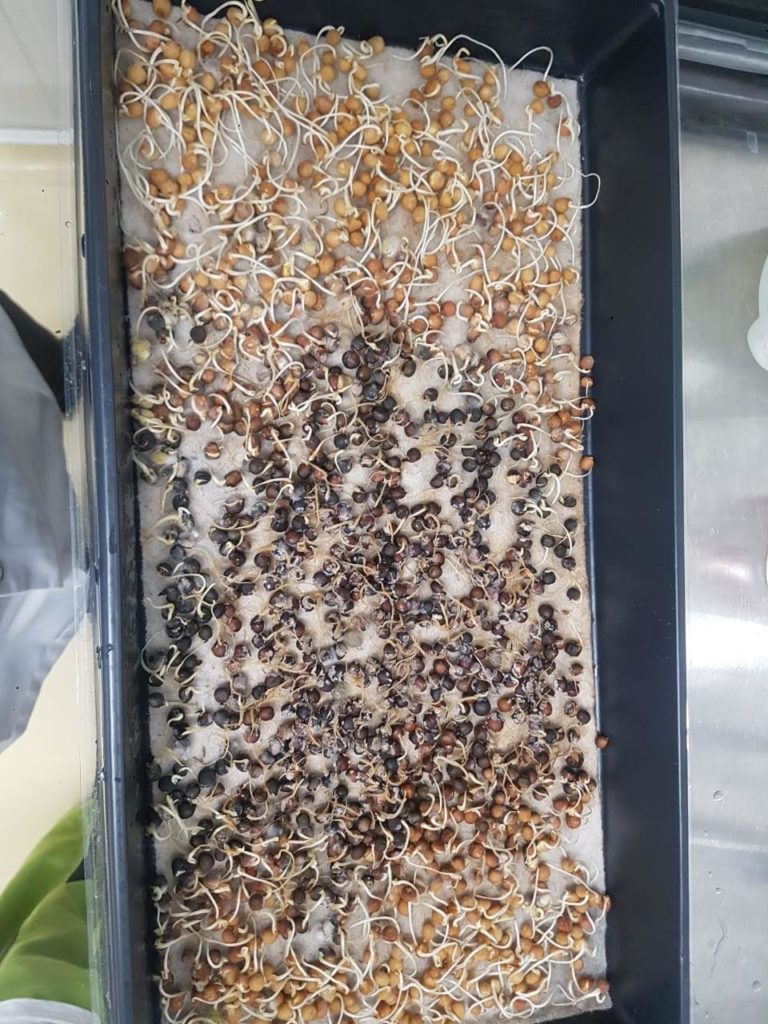 This is a summary of a question we got here on the podcast from a listener recently. If you grow microgreens, you’ve likely encountered the same or similar situations on your products.

Per Chris, if you grow pea shoots this is a common issue. As soon as you uncover the tray you’ll see black seeds. You’ll notice it won’t spread anymore. This is a fungal issue. When you see a fungus think: Air flow. (7:30)

To manage airflow think about your growing environment. How close are your trays stacked together? Are you using a germination chamber? Is there any air moving in that environment and what is the relative humidity? 80-85% might be too high. Peas are a cool-weather crop – is it too warm? Lastly, the fungus can be introduced via the seed itself and it should be sanitized.

There are important considerations to always keep in mind when trying to understand the possible source of disease in your microgreen system. (6:45)

What impact does seeding density have on disease? (11:30)

Airflow should not be affected by the density of seeds since the trays are stacked. In warmer climates, or during summer, spacing seeds out can be helpful since the seeds are a food source for a pathogen and if they are touching the disease can spread.

Is the source of fungus in peas the seeds or more so environmental? (14:00)

We soak peas overnight which can be a source of some pathogens, or at least give them a good start. But we soak them in a sanitizer which is likely to control this issue. How we’ve controlled pathogens in our environment is predominantly sanitation…

“I’m always looking for correlation and causation. When you change something what effect did it have? These observations are what make you a good grower.”

Look at these problems as the way you will become a better grower. If you learn what caused these problems you can solve these problems in the future. An example (20:00); I changed my soil mix to incorporate more compost at one time. This caused a disease flare-up. I worked backward in the chain of events and once I went back to only using my base soil and the disease went away.

It’s Not always a Lost Cause

Sometimes if you take the time to nurse a tray with a disease you can find ways to bring the seedlings back from the disease. At the least you can cut out the healthy portion of the tray and still sell it, you’ve invested a lot and should utilize it. (25:00) The disease is often centered on the base of the plant, so it can be cut above that level.

In the example of the radishes having brown spots on leaves it is likely this is a virus, especially since it’s appeared later in the crop’s development. Sanitization and antibiotics don’t treat a virus. The best thing you can do is control the environment to prevent their spread.

Get to know your seed company, such as a large supplier like Mumm’s Sprouting Seeds out of Ontario. They should be testing seed for pathogens; E.coli, salmonella, listeria monocytogenes. (38:00) Ask questions; what have other growers been reporting about this seed, because of this the experience I’ve been having? Before you buy a large lot of seed you should test germinating it in your system.

In Canada, microgreens are considered sprouts by the food inspection agency, the CFIA. In Canada there are not microgreen regulations, there are guidelines. This means you can adapt what are essentially suggestions to your system. But if you are to make an insurance claim if someone gets sick from eating your sprouts, and were not adhering to them, saying you were not aware of them will not hold up. It is a conservative, high accountability model.

In the US the FDA regulates. The food safety modernization act does not qualify microgreens as sprouts, they are a distinct commodity and they are considered ‘covered produce’. These regulations may change, however, as pathogens have been found in recent outbreaks. It’s best to operate under the safest practices.

Sanitizing is distinct from sterilizing. Sterilizing is only done in an autoclave and it removes both the living and dormant forms of pathogens, where what is done in microgreen systems is sanitizing, which does not remove these dormant forms which can break from dormancy later.

Sometimes your system will benefit from additional spraying of a sterilizing agent if there is an outbreak, for example, but you don’t need to make this a practice. Chris does not spray sanitizing agents on his shoots after they sprout, as some systems do, for example. You may have to take steps like this in your system, but it should be observation-based. (1:02:00)

“Do the minimal amount of work, have a minimum amount of input, to get the optimum or maximum output.”

It is important to remember; the seed is the most likely source of contamination. That said, while the Food Peddlers soak larger seeds in a sanitizing agent, they do not soak smaller seeds like brassicas because they are difficult to spread across a tray when wet. Instead, you could spray them with hydrogen peroxide after they are spread. (1:06:00) Even though that means you don’t disinfect every surface.

Accountability and traceability become more important as the reach of your product spreads. Are you shipping it across state lines? The further the reach the more precautions you should be taking.

If you’ve grown, or even if you just plan on growing microgreens someday for yourself, this episode lays out a lot of important considerations.

By growing with sanitization in mind you are going to not only prevent possible foodborne illnesses but also prevent significant losses in overall yield.

While it’s often overlooked, disease prevention and treatment is one of the critical factors that separate a good grower from a great one.

Be sure and check out other earlier episodes where Chris details how he’s made these sanitation and disease prevention techniques a natural and easy part of his business, and better yet, if you’re interested in the business of microgreens check out his course here.

One reply on “Common Microgreen Diseases and Solutions to Them (FSFS189)“