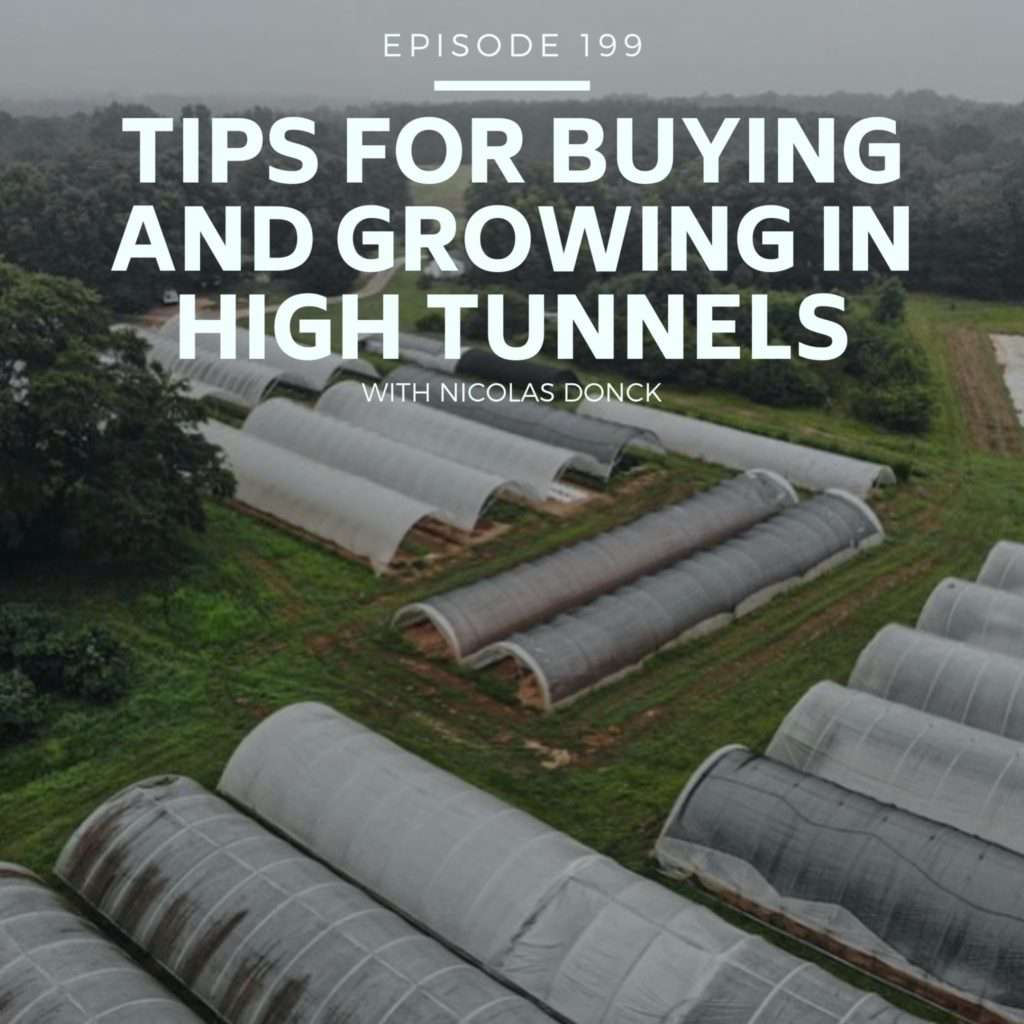 This week we talk about high tunnels with Nicolas Donck who owns 28!

He’s not going for high tech, he goes for low tech, a minimum viable product.

He’s going to share a lot about his winter growing techniques.

If you have any sort of protected culture on your farm, or are interested in experimenting with some, this episode is for you.

Can you describe your farm to listeners, including your high tunnel set up? (5:45)

We have 5 acres outside of cover and 28 high tunnels of various sizes. All of them are big enough for a tractor to drive in. We have two tunnels that are 20’x120’ that we call shade tunnels that we built ourselves – they were cheaper to build, but they’re definitely not as sturdy. Most of our tunnels are 26’x100’ and they are Haygrove style, connected to each other. Then 5 long tunnels, free-standing with 2’ apart, that are 25’x150’ – we built them that long to utilize all the space we had in that part of the farm. Then 2 16’x100’ and 2 that are 20’x120’ which we bent ourselves. Just be aware that these ones you made yourself are more susceptible to snow load and should have more cold tolerant crops planted in them.

What was the why behind installing the very first tunnel? (9:45)

It was installed 14 years ago. I got it from Growers Supply out of a catalog. We put it together ourselves. I had been farming for 6 years and we were going to a neighborhood market and selling everything. I noticed the market was wide open during winter and I just wanted to start winter growing. We went from negative cash flow to having money coming in every week of the year. We could have full-time employees now too. In the next year we bought 10, and every 2 years after that we bought 4 more for the next 8 years or so.

How do you view the payback period on these high tunnels? (15:20)

Within two years I would pay back the cost to build my tunnels. Now with the NRCS grant, you can get up to $7,500 reimbursed. I tell people you can have California weather if you build high tunnels in the South East and produce year-round.

What features have been cost-effective for climate control in your tunnels? (18:00)

My high tunnels are all single-layer plastic. None have roll-up sides. During the summer our Hargrove style tunnels have the end-walls open and the sides are up. In the wintertime, we attach woven heavy-duty plastic that you attach to the front of the high tunnels. It’s somewhat like a curtain that’s attached to a ¾” conduit pipe via wiggle wire throughout the high tunnel to insulate it. If it’s too cool we’ll bring some hoops in there and put row cover over the crops. I’ve found that the ground doesn’t freeze even when I go out there in the middle of the night with temperatures below 20 degrees. Greens on the crops will be frozen but the beets, for example, would be fine. In the morning with the sunshine, they thaw and are perfectly healthy.

How have you found the tunnels perform in the summer, especially without rolling up the sides? (25:40)

It gets hot in there, there’s no doubt about that. We grow tomatoes, peppers, and eggplant in the tunnels. With this high heat, we’ve had the tomatoes have suffered some. We use a lot of shade cover, 30% for the sides of the tunnel. It really helps with the peppers. With tomatoes, the temperature itself is the issue. It seems the cherry tomatoes have fewer issues. My big slicing tomatoes had the most issues. I’d have blight if I planted them out in the field.

We are able to grow arugula year-round, it’s not perfect in January and February though. Lettuce year-round, though they can get bitter in the summer and need shade cloth. We don’t use shade for eggplant. We grow cover crops in the summer-time to get the tunnel soil ready for winter production. We can go 52 weeks a year with our “CSA” or we call it a farm box subscription.

There is a risk of wind events like hurricanes and tornadoes. Insurance is difficult to get since they are not permanent structures and $400+/yr per tunnel which I found not to be worth it. It doesn’t cover the plastic. Unfortunately, you do have to rely on this plastic, which is a petroleum product. We get 6mil, 4-year plastic. I stretch it out for 6-7 years. It doesn’t tear apart, it gets cloudy and doesn’t allow light through.

Another advantage of growing undercover is the product stays clean since it doesn’t get hit by rainstorms. It can provide huge labor savings.

What irrigation systems are you using in the tunnels? (36:30)

We use two systems. We have 5’ wide beds in all of our tunnels. In each bed, we have 4 drip irrigation lines. Drip tape that’s 8mil 8” apart. Peppers, eggplants, tomatoes all have only 1-2 lines. It’s now all automated, controlled by a computer which has been a life-saver. Putting our header pipes underground and automating the system is something I’d suggest to everyone.

Crops we direct seed; arugula, hakurei turnips, salad radishes, and spinach, (we use Johnny’s 4-point direct seeded to seed), we irrigate with 4” tall micro-sprayers hooked up to a faucet that’s in every tunnel.  Once the crop is tall enough we change over to drip tape. Over time we’ve observed it’s best to water 45m once a day during the summer-time, every other day if there’s cloud cover. We have clay-ish soil here, even though it’s classified as silty loam.

What type of insect pressure are you seeing in these tunnels? (41:20)

The biggest insect pressure we’ve had recently has been grasshoppers and we’re not sure what to do with them. We tried using a siderophore wheat germ pesticide to control nymphs. Unfortunately, it’s no longer in production and I can’t use it organically anymore. We have armyworms and caterpillars, we use entrust and BT and only when necessary. We solarize as well, and that’s helped a lot. We’ve had to protect beets, swiss chard, kale and carrots from grasshoppers by covering the beds with shade cloth. Other growers around me say they don’t have the same grasshopper pressure. I’ve thought about getting a vacuum backpack to take care of them, sucking them up in the morning when they are sluggish.

I love growing iron-clay peas. They have a quick turn around. They are also the easiest to till-in and deal with. We incorporate them before they flower at about waist high. Hit them with a flail mower and then incorporate them in. Afterward, we need to wait a week or so for them to incorporate before we plant. We run drip irrigation on the bed to help it break down.

To plant them we use the Jang seeder at 4 rows per bed. We irrigate with 4 rows of drip tape. We wait only 4-5 weeks until they are waist high and then we can incorporate them.

Over the last 14 years of winter growing what’s been the biggest lesson you’ve learned to be successful? (51:20)

The one thing I tell myself every year is to keep the ball rolling. I always know what crop is going in after every single bed. You should think 2-3 crops ahead. You always need to know what you are going to do with every bed. Those tunnels are high investment real-estate and you need to know what’s going into them at all times.

Have you grown any winter crops that you felt weren’t worth the investment in the tunnels? (55:05)

The one crop that comes to mind is peas. In my experience, they haven’t been lucrative. The crops I’ve found that have the highest return are the ones that grow the fastest, and that can produce for more than one crop. Swiss chard, kale. We plant them in September and harvest from them all the way through to April of the next year. Another crop that does well during the warmer months is arugula.

Salad radishes are productive and taste better in the winter. Crops like radicchio are not as productive. They are easier to sell than radish, but I find that I’m growing less of the radicchio as I’m able to sell more of the radish. Spinach is another good one. I am also interested in growing broccoli, but a variety called De Cicco which has a long side shoot production season and can be harvested from for months.

How would you advise new farmers to crop plan for the winter? (58:40)

You have to know your market. I’m always amazed by how much comes out of a bed like swiss chard. I’d advise people to focus on crops like that. If you have space I advise you put in as many tunnels as you can afford to. The demand is there, you should increase your production during winter months to capture it.

When you are buying tunnels are there structural components you are looking for? (1:03:10)

I feel all high tunnels are decent quality. I work with a company called Atlas Greenhouse. Our high tunnel that I put in 15 years ago is still doing great. If I do want to expand my business I know what I would do. I already have the land ready. I prefer the 24’ wide tunnels since I can fit 5 beds in them, and they’ll be 180’ long. For these tunnels that are only 2’ apart, I actually leave the side walls open. I do that because those long tunnels would hold a lot of humidity and heat. It obviously needs more row cover as they get colder, but I’m experimenting to see how the crops do. For warmer weather crops I’ll put side walls up.

Make sure you are prepared for whatever cold weather will come your way with some heavy row covers. You also have an increased risk of ice and snow staying on top of those tunnels during weather events when they don’t have sidewalls, as they won’t heat up as much during the day.

Nicolas does consulting for which he provides the first 30 minutes free of charge, and he’s more than happy to answer single questions if you reach out.

He has over 20 years of growing experience.

If you live in the area you can also visit their market stand at the Morningside Farmers’ Market.