Changing Based on Customer Demand (FSFS202) 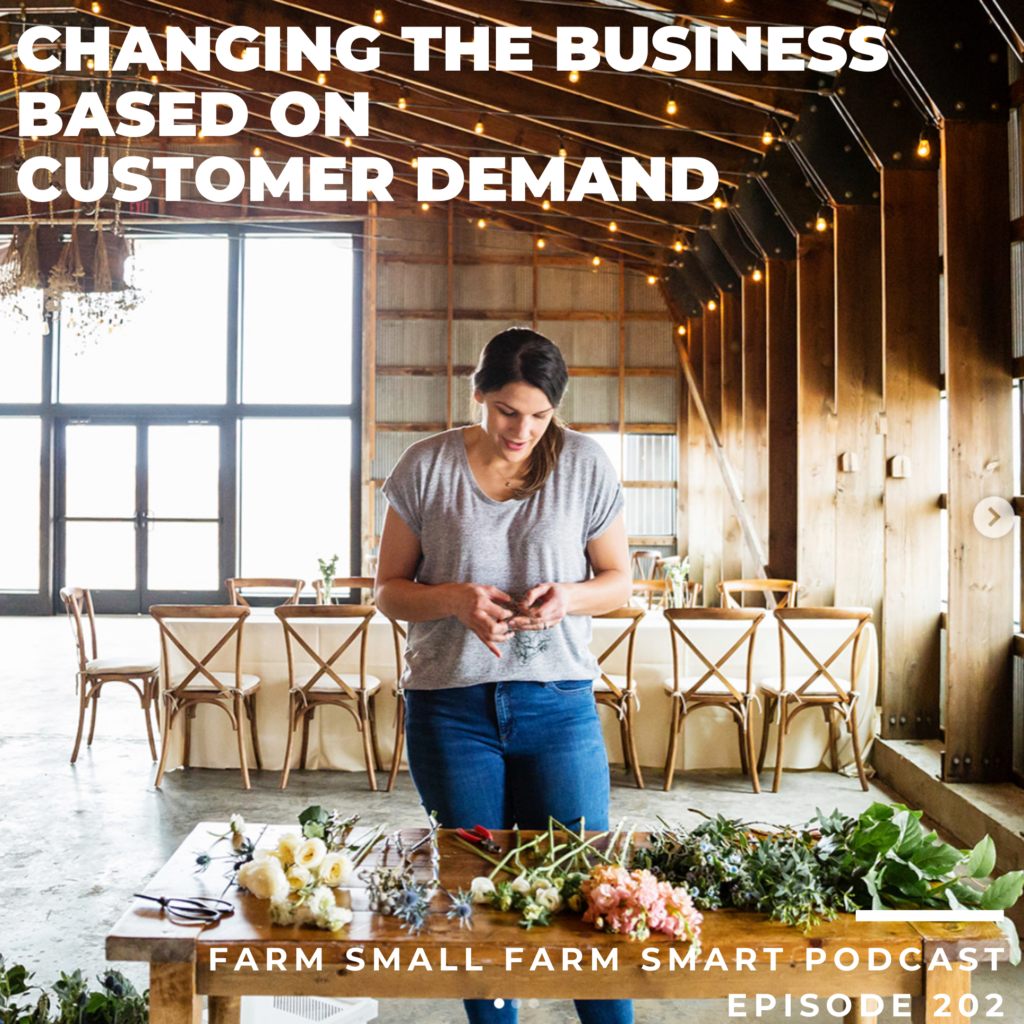 This week we talk with Chris and Audra Wyant from central Illinois of Finding Eminence Farm.

Chris started the farm growing vegetables, but at first flush, the farm wasn’t selling enough. That’s when Audra came in growing flowers. Adapting and pivoting along the way they added not just flowers, but a flower CSA, on-farm workshops, and floral design for weddings.

They also discuss their Instagram and Facebook ads. This episode is all about knowing when you need a change and knowing and spreading your brand effectively.

When we got started we were incredibly naive. I got into a new farmer training program and got started right away. Over the next two years, we grew only vegetables and had a heck of a time trying to sell them. Without trying very hard we found outlets for flowers and started growing those. This also allowed me to get better at farming by concentrating on what we were doing by simplifying our crops.

We were ok with keeping the farm as a side hustle for a couple of years to see how it worked out and if it made money. We started growing flowers and quickly realized we needed to add value to them. We went from zero weddings our first year to ten our second. It evolved out of necessity, and our weddings are half of our income. Part of what limited our sales was our own resistance. We had an 18-month-old and didn’t want to give up our weekends going to market, so we started an on-farm stand.

Understanding who we were selling to was important, which included weddings. We asked people to tell them about themselves and realized our brides were outdoors people, and school teachers, etc. Then we were able to fine-tune our social media advertisements to reach them.

When you are communicating about your flowers to a bride what are the key selling points you are trying to share to make the sale? (20:15)

I want to get to know the couple and find out what is important to them. We try to communicate with them respectfully and get them what they are looking for within their budget.

Roughly 75% is grown to flowers and about 40% of that goes to weddings. The rest goes to a flower CSA and a local market.

That’s evolved over the years. We used to drop off deliveries of flowers with greens on people’s doorsteps. Chris became tired of driving around in the car for hours into the evening when he was looking to wind down his day. We now share a joint CSA with another farm that has a pick-up and so we don’t have to deliver anymore, and we like that a lot better.

It’s an 18 week CSA. People pay $18/wk for the flowers. We dropped the microgreens since we didn’t want to compete with the other CSA we were working with. It has good margins. We have built in the ability for them to put it on pause as desired and they get a twice a week reminder text for them to come to the pickup.

It was a gradual learning experience for us. We think we over-priced it the first time, but after that, we hit the sweet spot and advertised it well. We had people go out in the field and harvest their own blooms which saved us labor as well. We charge $60 a head. We give them a farm tour and a nice vase. People are craving that connection with farms and the experience of being on a farm is something they can get excited about. It works well as a present. It’s an hour of work beforehand and the class goes about 2.5hrs.

How do you select your flower varieties? Do you grow for weddings and then the rest of your market streams just pull from that? (34:30)

For sure. It’s a lot of white and blush coming out of the field. Sometimes we have to order in different colors that a rogue bride here and there want. We have to order in eucalyptus and garden roses. Peonies, lisianthus, and dahlias are our staple crops. We still do weddings in the off-season to keep cash-flow coming, but we are clear nothing is coming off the farm during that time.

What are the major differences from a production stand-point with growing flowers vs. the vegetables? (38:30)

Making the system work with them together can be challenging at times. If I have landscape fabric that is spaced for flowers I need to plant heads of lettuce into I can’t get them as close as I’d like in the rows. I also have to be careful of low growing vegetables being next to tall flowers.

When processing flowers by cutting them in the field and bringing them into the cooler, and then even taking the time to put them into bouquets, it’s a lot less work overall than cutting salad mix and then washing and packing it.

Do you ever consider just growing flowers? (41:30)

Chris did get into farming in the first place to feed people so it would be hard to see that side of the business go away entirely. Thankfully the microgreens have helped him hold onto that aspect of the farm as they have been profitable recently. We also earn a good amount of income from the vegetables in the winter months when we don’t have other cash flow which turns out to be important.

Yes, we were surprised by how lucrative they could be. We have a bakery that adds them to cupcakes and cakes, a restaurant that adds them to drinks, and also we sell some mixes that get the flowers as well. Violas, stock, and borage are our most popular edible flowers.

What is the expectation for income going into the future? What would it take for Chris to be full time on the farm? (45:00)

We have Audra on the farm full time and she’s almost at the point where she’s earning a full-time income. For Chris to come full time on the farm we’d have to go from the 24 weddings we did this year to 40 next year as well as increase our class income and ramp up our CSA sales.

Is there a lot of consistency in weddings or can the income from them vary a lot from year to year? (46:00)

What changes a lot is what type of weddings we have and when we have them. I do have concerns about them not being there from year to year because we have had a slow year back in 2017. It’ll happen with vegetables as well. It’s felt like this year we’ve had to practically give away our salad mix, but then when we started adding microgreens and flowers to the mix they started selling. Neither of these markets feels like a given.

Yes, we put those together at the end of the year. We also advertise on The Knot for our weddings. For our weddings, we put an image of a bride holding our flowers so people can picture what they’re going to look like. We learned we needed to take the same approach with advertising our classes since we at first just put images of the workup and that didn’t get nearly as much response as a picture of me having fun designing a piece.

I’ve found you need to spend a little more than you think you do to get the advertisements across. Don’t just boost a post for $5. You need to spend about $40 a week to get it across. We have a $1,800 line item on our budget for advertising a year.

When putting the wedding advertisements out we play up the keywords like local and seasonal to get unique attention that we can offer. For class advertisements, we focus on keeping the advertisement as short and to the point as possible. Another important point is making sure that when someone is willing to act on their impulse to purchase that it’s as simple and easy to pay as possible.

With your graphic design background, Audra, you are planning another venture soon. Can you describe what you have in the works? (56:30)

We are collecting images on our farm and planning to launch a calendar design business for other farms. They can get a tailored and branded calendar through us. We are also planning on doing general design for other farms launching this fall. Whether they need a logo, help with their website, letterhead or notecards we can help them. We want other farmers to know it’s not difficult to look really sharp nowadays and we can help them get there.

We sell the calendars here on our farm around the holidays and we also send them to our wedding clients throughout the year.

What do you think small farms need to do differently with their branding? (59:45)

Often you can tell people have an idea for a logo and then they’re lost in how to create it. Or they get their logo done and then they think they’re done. They don’t have a cohesive vision that showcases what they are trying to present. Branding is the whole feel and you need to curate everything you are presenting.

People need to also know who their primary customer is so you know what your branding needs to look like to appeal to that customer.

What would you say to someone who says they don’t have enough money to budget for advertising? (1:03:00)

I would say you’re misspending your money. Also, it’s not as expensive as you think it is. We don’t need thousands of dollars to create a cohesive design. You need to have a realistic vision of who you are as well and tell your story through your farm.

For people who want to find out more about Finding Eminence Farm and what they are up to you can follow along on their Instagram @FindingEminence and via their website at FindingEminence.com.