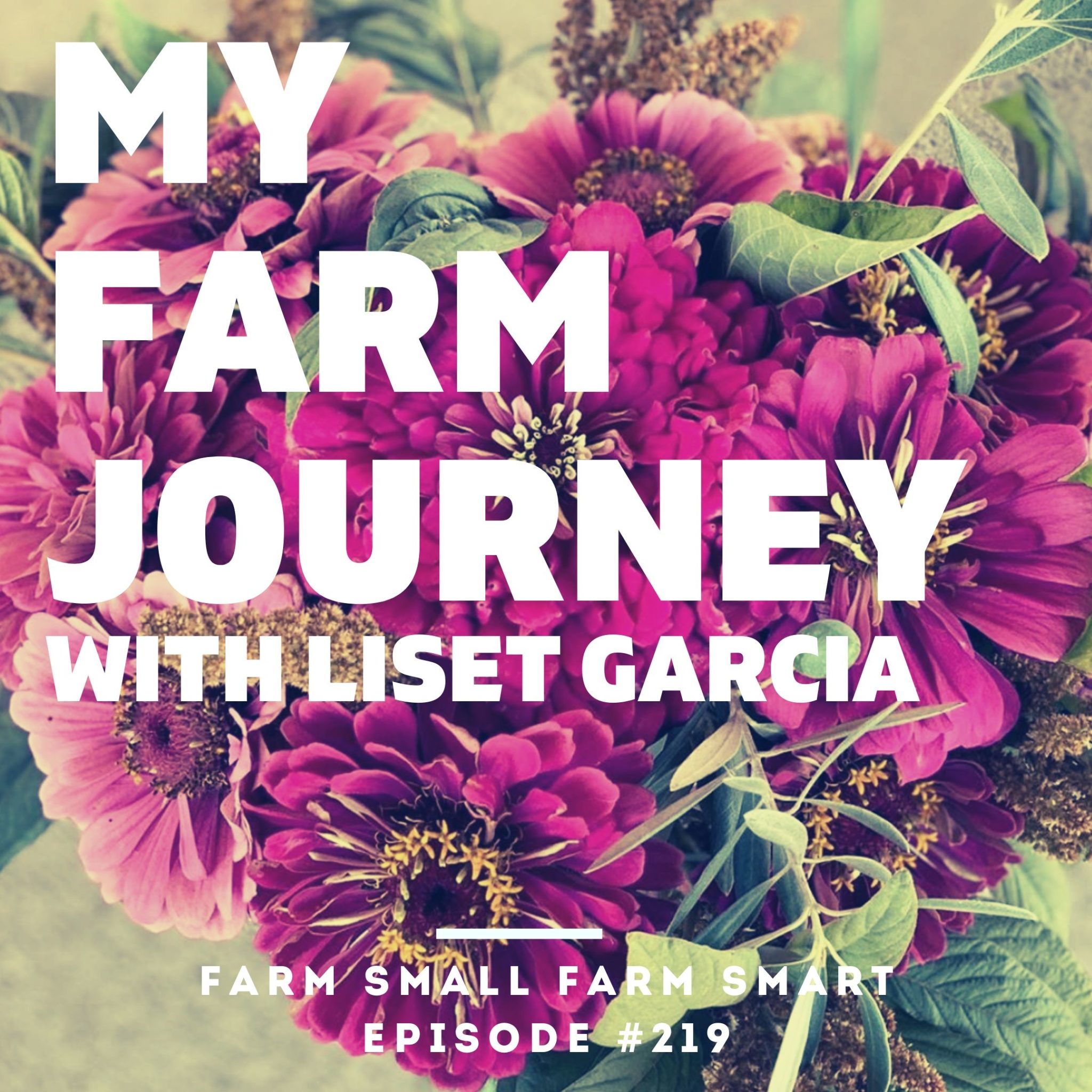 On today’s episode, we have Liset Garcia of Sweet Girl Farms talking about her farming journey—what she did to get started, what it’s like being a female farmer, and the ups and downs of starting the farming life.

It started with flowers.

I was in the midst of a lot of changes in my personal life, and growing flowers worked out like a therapy for me. I got interested in flower farming when I went on Instagram and checked out flower farms in the Washington area. About a year ago, I moved to Central Valley, California where my parents have a farm. They allocated an area in the farm for me, and I started growing stuff on my own. Eventually, I got interested in farming.

Do you think the Hardworking Ethic is infectious, or is it something that you could lose after a while?  (6:00)

I feel like it’s in my blood. I was literally born into the business. My mom carried me while she was selling fruit in the farmer’s markets. But while that’s true for me, I feel like that ethic could get lost because it’s different with my brother. We’re ten years apart, and he doesn’t have the same hustle, grind-it-out-‘til-the-job-is-done kind of feel as much as I do. And it

Do you think your parents wanted you to do the same things they’re doing? (9:40)

Oh, no. I remember when I was 15, my dad told me, “I don’t want you to work the way I work. I don’t want you to work in the fields.” That’s why he sent me to college, so I could get a higher education. He said he didn’t want me to suffer the way they’re suffering the elements.  That was how they were before, but I know that they see it differently now. They fully support me with what I want to do.

Being a farmer from a minority, do you feel any pressure working in agriculture as a Mexican-American? (13:00)

Maybe not so much as a Mexican-American, but I feel the responsibility more about making sure the business is succeeding because of the countless hours of work we put into it. I have this sense of pride knowing this business was built from the ground up, that we can literally grow things and feed people.

It’s still a journey, really. Coming into the farm, I knew I was going to be secure with fruit because that’s what my parents have been doing. But I also wanted to grow something on my own, to prove that I could also separate from my parents’ business and be independent.

The flowers served as therapy for me because I was recovering from my hand injuries at the time. I thought that flowers won’t be too hard to grow compared to growing grapes or peaches or any other fruit. The vegetables came after doing some thinking and arriving at the idea that I’m going to need some type of produce to supplement me in the wintertime when there aren’t any flowers.

How do you think the business is going along so far after bringing in the flowers and vegetables along with the fruit? (20:30)

Up until this moment, I can say that the last two months have been excellent. So far, I have exceeded my expectations of what I thought I would be able to sell. I can’t keep up with my vegetable demand and it’s blowing me away. Things are going good now, but having said that, there are days in the winter when I’d only sell $5 after staying at the farm stand the entire day, maybe $80 on a good day.

Have you changed anything marketing-wise to draw people in? Did anything happen that boosted your sales? (23:00)

When it’s hot outside, people just want to get out. Also, CoVid happened. People treat going out and buying food as an outing. You know, taking that 30-45-minute drive to the next town over just to get out. It helps that I have good visibility on the road.

Plus, now that it’s summer, we have a lot more variety in terms of fruit and vegetables available. I also believe that people are knowing more about the farm stand through word of mouth from my customers. Not to mention the social media presence has also increased since I started doing more videos on my Instagram, Facebook, and YouTube. I do TikTok now, too.

Where do you want your business to be on its two-year anniversary? (36:00)

The farm and the farm stand are two separate entities because my parents run the farm on the fruit side—they grow the fruit and distribute them. I, on the other hand, handle the flowers and veggies as well as the farm stand.

The farm is doing well as it is, but as for the farm stand, I’ve already talked to my parents about the modifications I want to do like expanding parking and having a seating area. Also considering the new times we’re living in, we have to do modifications to keep everything safe. I also thought of hiring someone to help all around in the farm.

All the advantages! Not for a second did I ever think that being a woman is a disadvantage.

When people see me, they wouldn’t think I was the farmer. When I get to chatting, and people really enjoy it, I share and show a lot of the things I do in the farm because the stand is literally a few steps away from the farm. But being a woman in itself, do I find it weird or surprising? Not as much as people put it out to be, really. It’s been pretty fun. I’ll say that most of my customers are male, that’s why I think it’s been all the advantages—haha!

Do you see yourself as a role model for other young girls? Do we need to see people like us doing what we want to do to encourage us? (50:20)

You mentioned a lot of things that got my gears going. One is if I consider myself a role model. I don’t, but it’s a little mind-blowing that that can be the case. It just doesn’t feel that way to me because I kind of just live my life as it comes.

Another point is do we have to see other people to encourage us to do what we want to do. I think we do. And I didn’t necessarily have a female farmer to look up to, but being alongside my mom and watching her made me see that her work ethic is like none other. She’s a savage, she out-performs everyone. And she’s a tiny lady. No one expects a tiny lady like her to carry a 50lb. bag of oranges all by herself. And that in itself is pretty cool. And that’s why I think it’s necessary to see other people that resemble you in all sorts of ways—the color of your skin, your stature, your nationality, your ethnicity, your language—doing what you want to do.

It’s hitting me right now knowing that’s how someone sees me when I’m putting myself out there, and it’s so cool. It’s so big for me to even take that in how you described that just being xyz can motivate someone else and change their lives.

I think it’s opening people’s eyes to possibilities that have always been there but they’d never taken advantage of because there wasn’t anyone who looked like them, talked like them. It’s helping the next generation to do whatever you’re doing, but also do it better.

What helped you go through the hard times in the first year, those slow days when the weather isn’t great and there’s not a lot of traffic on the road? (1:04:00)

I think back on why I’m doing this. I have personal goals that I want to achieve. I know that I have go through the ups and downs of the business.

The business is the baby—it’s what takes up 90% of my life. It’s something that I’m growing with because it teaches me a lot of things—from history of the town to what people do here for fun. That adds to the greatness of the business and that’s what keeps me going.  So whether I just make one sale in a day, talking, and connecting with people really does give a sense of unity, and it also gives me the opportunity to propagate that happiness.

Balance out the research and the execution. Act on the knowledge you acquire from because that’s where you’ll see what you’re good at in farming. Doing research is a bit of a waste when you don’t try to apply what you learned.

Got you hooked on Liset and her Sweet Girl Farm life? You can connect with her on Instagram, Youtube, and Facebook. You can also check out what they have in stock on SweetGirlFarms.com!